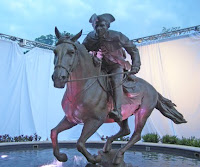 After months of work, Captain Jack, a Revolutionary War figure in Mecklenburg Co. was finally unveiled in Charlotte Wednesday evening. Cokie Roberts spoke briefly as did the artist Chas Fagan. A small version of the statue was auctioned off to raise money. Ed and the crew at Carolina Bronze were all delighted to see the statue out in the open. They have been working for months to get it finished. Ed and I attended the Gala ceremony on Wednesday and the public unveiling was on Thursday. After the ceremony we went for coffee and dessert at a local resturant. It was a beautiful night to be in downtown Charlotte. It reminded me of how much I miss living in a big city. If you get the chance, stop by and see the sculpture. It is, as are all of Chas's sculptures, beautiful. Go here to read more about the unveiling and about Capt. Jack's ride.
Posted by Melissa Stanfield Walker at 3:19 PM No comments:

Melissa Stanfield Walker
Melissa Walker is a North Carolina artist and art instructor working in abstract acrylic and collage paintings, pastel and watercolor, visual journals, altered books and ATC’s. Her art classes provide high quality personalized art instruction emphasizing skill development in design, composition, drawing, painting and color theory to both teenagers and adults. Melissa’s work is influenced by abstract expressionism and incorporates many mixed media elements. She is a National Board Certified art educator with over 23 years experience teaching all ages of students. She received a BS degree in Art Education from East Carolina University and a MA degree in Painting and Printmaking from the University of North Dakota in Grand Forks. She has continued to study painting with well known artists and instructors Robert Burridge, Bob Rankin, Joe Deguilio, Sterling Edwards, and Jack Shields. She recently had 3 artist journal pages published in the book, 1000 Artist Journal Pages, by Dawn DeVries Sokol and is featured in the Teacher-Student Portfolio of the Aug/Sep 2010 issue of School Arts magazine. Melissa teaches art at Randleman High School in Randleman, NC.